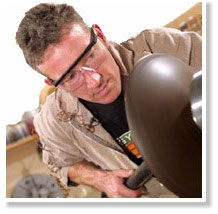 Jimmy is not your ordinary woodturner.  Upon a first meeting one would think of him as a renegade, a free thinker and not within the stereotypical image of a woodturner. His charming British style, unending wit, creative mind and magnetic personality are only some of the attributes that make him popular in the woodturning demonstration circuit.

Jimmy is on the Register of Professional Woodturners in the United Kingdom and a member of the American Association of Woodturners. He has over 22 years of experience in woodturning and woodworking. The demand for his services as a freelance demonstrator and teacher takes him all over the world including his homeland of the United Kingdom, Europe, Canada, Norway, Finland, New Zealand, Belgium, Australia.

youtube It was not long after leaving school at the age of 16, Jimmy attained an apprenticeship in engineering and decided to further his studies by attending Manchester Polytechnic in Manchester, England. He received a 2:1 Honours Degrees with special emphasis on learning 3-Dimensional Design. With that focus, he began to specialize in designing and making furniture which was influenced by Japanese tools and design.

It was during his time in college that his interest in woodturning was rekindled. The combination of his college education, his limitless imagination and his professional skills was a perfect fit for Jimmy to pursue his creative abilities as a woodturner and to take that ability to the next level.

When asked what drives him, he shares, “My energy comes from those around me. When I can stir the creativity of one’s mind, that for me is very satisfying. As with any artform, expression is only limited as one’s mind and I want to ‘raise the bar’ and create an awareness of the artform that has been virtually unknown to most people.”

As an avid sportsman and adventurer, when he is not busy teaching and demonstrating, you will find him expanding his creativity by exploring nature and enjoying the beauty of the desert. Or you might find Jimmy in his new workshop in Las Vegas creating innovative woodturning designs. 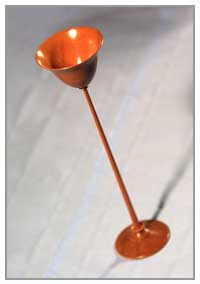 Jimmy is the first to acknowledge that personal tutelage is by far the best way to learn. However, since that is not always possible, he released the critically acclaimed DVD Turnaround with Jimmy Cleweswhich sold thousands of copies around the world. The then released a 3-box set DVD Turn it On with Jimmy Clewes that incorporates a range of new projects and some fascinating extra features from technical tips to a special trip to a Roman museum. A second 3-box set DVD, Turn it Up with Jimmy Clewes that includes new projects and discusses various methods of mixing and using colors. A third 3-box set DVD, filmed in High Definition Widescreen, Turning the World with Jimmy Clewes includes projects filmed in Norway, Scotland and the United States with special features including the renowned Norway Woodturning Cruise. Back to Basics with Jimmy Clewes a 2-hour single High Definition DVD answers questions in detail on many topics he is often asked during his travels and includes three detailed projects perfect for the novice turners.